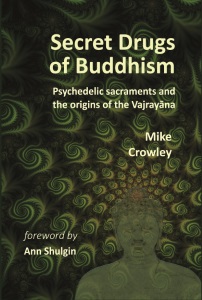 What people are saying about this book…

Writing clearly, in the manner of an investigative reporter, Mike Crowley unlocks the mystery of amrita and answers, with previously unseen certainty, the question of whether of not psychedelics were part of historical Buddhist practice.

Mike Crowley has manifested a book on topic rarely spoken of, and certainly never explored with such depth. With a combination of personal anecdotes, detailed historical research and a large collection of traditional art, this book will encourage modern-day Buddhist yogis and mind-explorers to see their practice and its roots in a new way.

Psychedelic drugs in Buddhism? Believe it. Don’t believe it? Read this book!

Secret Drugs of Buddhism is the first book to explore the historical evidence for the use of entheogenic plants within the Buddhist tradition.

Drawing on a wide range of disciplines (including pharmacology, iconography, botany, and scriptural sources) this book brings attention to the central role which psychedelics played in Indian religions, tracing their history from the soma of the Vedic period to amrita, the sacramental drink of Vajrayana Buddhism.

In particular, Secret Drugs of Buddhism aims to identify the ingredients of the original, psychedelic form of amrita. In doing so, this book presents evidence from many countries in which the Vajrayana movement flourished, including Tibet, Bhutan, Mongolia, Nepal and Japan but special attention is given to India, the land of its origin.

Mike Crowley began studying Buddhism with a Tibetan lama in 1966, becoming an upasaka of the Kagyud lineage in 1970. In order to augment his Buddhist studies, he acquainted himself with Sanskrit, Tibetan and Mandarin Chinese.

Mike has lectured at the Jagellonian University, Cracow, the Museum of Asia and the Pacific, Warsaw, the California Institute for Integral Studies, San Francisco, and at the University of Wisconsin-Madison. His work has been published in Fortean Studies, Time & Mind the Journal of Archeology, Consciousness and Culture, Psychedelic American, and Psychedelic Press UK.

In January 2016, Mike received the R. Gordon Wasson Award for outstanding contributions to the field of entheobotany.