The Ayahuasca ceremony is a traditional South-American ritual. It has been performed by an uninterrupted chain of tribal generations before getting on the front pages of western scientific interests.

The ritual of drinking the ayahuasca brew, obtained from the concentrated mix of Psychotria viridis leaves and the vine Banisteriopsis caapi, is not the same today as it was when men first discovered this magic combination. The ritual is continuously enriched with cultural exchanges happening within the continent, between indigenous civilizations.

The ritual has been powerfully influenced by the input of Western society with the coming of the Spanish conquerors and the creation of an inter-breed common background. Before the practice is done in the jungle but some now do this in closed doors. Also, the traditional practice used icaros healing songs while today, a number play Christian songs.

This makes the ayahuasca therapy a flexible and permissive practice that is open to new interferences.

The benefits of Ayahuasca therapy have been studied and attested by scientific means. The line of research, though, is concentrated on the interaction of the 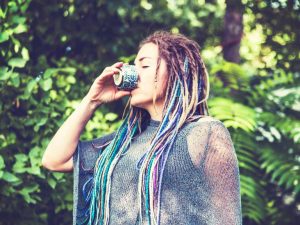 In the aborigine science, the spiritual journey is inseparable from the process of healing the body, and for this reason, the actual drinking of the brew is only one of the elements of the complex ritual. For western science, on the other hand, the ritualistic dimension seems more of an obstacle than a veritable component of the therapeutic process.

Researchers consider the ritual a variable coordinate, with an effect that cannot be predicted and neither measured. Due to the lack of data to analyze the outcome of the tribal ceremony this remains inadmissible for the medical professionals.

The ritualistic factor is itself dependent on an entire context, from the experience and energy of the shaman, the rest of the group, the atmosphere, and so on. All of these conditions are as unpredictable, and as such as problematic to be taken into consideration from a scientific point of view.

The specific influence of the ceremony in the whole success of the Ayahuasca therapy could be minimal and thus unimportant. But could also be taken as maximal, attributed to the participation in group therapy, an activity that through its very nature, is known to have impressive uses and effects.

Ayahuasca Ceremony Is More Than The ‘Set And Setting’ 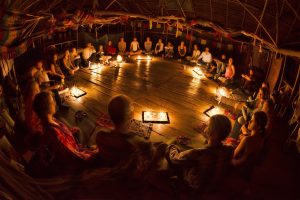 The Ayahuasca ceremony is more than the setting and intention required for a psychedelic experience.

For the aborigines of South America, ayahuasca is a sacred spirit that comes to heal, enlighten and restore the balance of life. It is seen as the spirit of Mother Earth and the ritual is mediating the communication between man and this divine soul.

Ayahuasca therapy cannot be fulfilled without the ritual of songs and prayers because they are part of the healing process. In this organic perspective, every detail has its own importance and comes to play only when it is needed.

On the other hand, the western medical school assigns all the importance to the chemistry of the drug and consequently studies its chemical interference. The only thing western doctors appreciate in the tribal ceremony is the influence of sound.

The therapeutic effects of sound have been intensely studied and applied in different types of therapies including those with other psychotropic substances.

The Westerns cannot see the whole process as an organic interplay of energies that work together. The shaman, on the contrary, is trained to be aware of the energetic structure and its fluctuation.

In this way, the shaman knows when there is a change in the group’s vibration, where it happened and what instruments he can use to re-establish the common harmony so the healing process can go on.

Hence every Ayahuasca ceremony is unique. The shaman adjusts his repertoire in accordance with the experience of each of the participants. He uses different sets of songs, sometimes blows more smoke and burns more incense, other times he promotes meditation for longer uninterrupted periods of time.

Why The Tribal Ritual Cannot Be Granted Scientific Value? 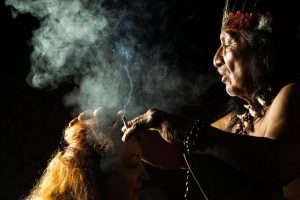 The type of contextual approach that tribal ceremony demands are something that cannot be conceived under the limits of scientific reasoning.

It does not fit the rigid standards of evaluation. Thus, cannot be taken into consideration as a valid medical treatment.

The scientific line of reasoning says that if there are too many variable coordinates in their studies, then, it will become almost impossible to decide which was responsible for the results and in what measure.

Due to these restrictions, each therapeutic instrument has to be studied and experimented individually including the smoke, the perfume and the presence of the shaman. But these are too difficult to study and are often dismissed.

The setting of any conventional clinical therapy will almost always be devoid of any stimuli that can interfere with the clarity of the test’s results. The experience must be as clean and limited as possible. But on the contrary, the ayahuasca ceremony in the jungle is a complex process that is fed with very strong exterior stimuli.

What Are The Main Features Of The Ayahuasca Ceremony?

What is Ayahuasca? Ayahuasca therapy is a ritualistic ceremony guided by a shaman who sings traditional icaros songs. The process involves ayahuasca, a mind-altering concoction made from two Amazonian plants Banisteriopsis caapi vine and the leaves of the chacruna plant. The ceremony is usually done in the Amazon jungle to help the spirit of the participant heal his body and mind.

An untrained mind can get completely lost inside the typical dimension of the ayahuasca trip. Once the limits of perception are gone and the mainframe of the mind is distorted, fear can get hold of one’s thoughts and block the path.

The shaman can sense the struggle of the participants and will use ritualistic instruments to smoothen the process. The shaman will sing a song or burn incense, to help hypersensitive beings regain their balance and continue their journey.

When entering the higher dimension of the collective consciousness, you open the door to all sorts of conscious entities. The energy that you emanate attracts the entities that you feed on. Negative vibrations generated by fear of this unknown realm will call for like-wise entities.

The shaman can help cleanse these negative energies with the power of his magic equipment. He is your protector in a dimension of reality where you feel unsure and unsafe.

The importance of the shaman during the ayahuasca ceremony cannot be contested. A shaman is a crucial part of the ceremony.

Esteemed doctors who engaged in the ritual of drinking ayahuasca admitted that their experience was in great part owed to the active participation of the shaman.

Meanwhile, several people confessed that the visionary part of their journey started only when the shaman began to sing. Many also shared that the simple presence of the shaman shifted and calmed their state of being.

Role of Songs and Prayers 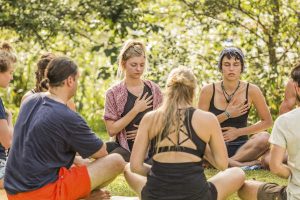 The role of songs and prayers is to open the gates towards the upper worlds and let the angels in.

By singing the icaros, the shaman proclaims gratitude towards Mother Earth and the gods in the skies and invokes their presence to heal the present souls as well as the vibration of the planet.

The simple incantation of certain combinations of notes has the capacity of turning and uplifting your trance. When you are in a very sensitive state, sounds can make you transcend to a higher level of awareness and into a greatly expanded perception.

Magic Routine with Smoke and Perfume

The magic routine with smoke and perfume has the purpose of cleansing the residue energies.

But the smoke of mapacho, the jungle tobacco, has also the ability to connect you to your past, to the ancestors that preceded you and further down the line through entire generations.

These instruments are not integrated into conventional medical practice with ayahuasca. Usually, the process is carried out without the guiding and protective authority of the shaman, leaving you alone on your journey with a group of medical staff to observe the process and intervene in case of emergency.

How Is The Jungle Ceremony Transposed In A Clinic Environment?

The conditions that need to be met for an ayahuasca study to be considered scientifically valid are very strict.

There are many obstacles even if the doctor managing a private session is willing to bring as much of the jungle setting inside his laboratory.

The Universidade Federal de Sao Paulo conducted a study of the acute biphasic effects of Ayahuasca, in a psychiatric facility. The setting was a regular hospital type of room, with just a few covers on the wall and a single plant in the middle.

The 21 volunteers were lying in bed, assisted by two researchers and a nurse, in complete silence during the whole process.

Leanna Standish, professor at Bastyr University Research Institute in Seattle studied ayahuasca’s healing potential based on the medical results. Although she engaged in traditional ceremonies long enough to consider the importance of a shaman to bless the ayahuasca brew that will be used, the conditions of the session have to follow the laboratory’s safety rules and guidelines.

The participant will have the session in a conventional room, assisted by two therapists, in the atmosphere of the music selection that is usually employed in therapies with other psychedelic substances. This playlist contains Hindu chants and classical symphonic music, all being carefully selected to aid the introspective process.

Jessica Nielson, neuroscientist and professor at the University of California wants to go even further by involving of the Amazonian culture in the western clinical treatment. In the research and therapy dedicated to PTSD, she wanted to provide patients with an open outdoor space that would allow a minimal connection to nature. She also considered the presence of a shaman a significant element in the process.

The ayahuasca therapy as performed by western medicine may generate a very different experience and result in respect to the culture that offered the world the knowledge of this plant remedy.

Observational research is being conducted in South American traditional retreats and few features of the ceremony have been included in the clinical trials.

But essentially, the conventional medical experience of ayahuasca in a hospital environment setting is very different from the traditional jungle ceremony.

The absence of a shaman and the lack of jungle stimuli, icaros songs, and smoke that make the trance smooth has a huge impact on the overall ayahuasca journey.

It appears that the ancient ayahuasca ceremony is entering a new era of transformation. And it is difficult to predict the results that the latest mix of western and aborigine cultures deliver.