Ayahuasca is Not a Drug Under International Conventions

In recent decades, the use of ayahuasca has spread west, where it is becoming popular because of their potential beneficial properties derived spiritual experiences it brings. The globalization of the planet and the development of new technologies have allowed ayahuasca can be acquired by importing countries, like Peru where their use is traditional..

The International Narcotics Control Board (INCB), which is the international United Nations (UN) governing the prohibition of drugs, INCB itself has repeatedly held that “no plants (natural materials) containing DMT is currently controlled by the Conventions on Psychotropic Substances of 1971.Therefore, preparations (eg., Decoctions) made with these plants, including ayahuasca are not under international control and therefore not subject to any provisions of the 1971 Convention. ” A Chilean court has just positioned in the same vein, invoking international treaties, to absolve a couple charged with drug crimes DMT. The court also has ruled that no evidence saying that the use of ayahuasca endangers the health of people.

Most of the information found online on the illegality of ayahuasca, as outlined above, is completely false. Ayahuasca, according to the INCB, is not any processing or production of DMT, then no judge should interpret that. Ayahuasca also no longer on the list of drugs controlled by the state in many countries. For international law and Spanish, which is governed by the conventions of the first, because ayahuasca is not legally a drug. Therefore, allegations of “crimes against public health” made people receive ayahuasca from South America Peru, are made against International Law.

From Peru we call upon the accused, their lawyers, judges, police, journalists and the general public to know that ayahuasca is not a drug, that ayahuasca is not subject to audit or by international law or by national, that Ayahuasca is a plant traditional use should be protected, notpersecuted, by assuming for many millions of indigenous root that is rooted in cultural tradition, by assuming for millions of Westerners an invaluable spiritual tool, by assuming a singular discovery scientific terms, and, ultimately, because protecting it is protecting the expression of a world of diversity and cultural enrichment. That is why the UN has proposed that ayahuasca is recognized Cultural Heritage of Humanity. PERUVIAN GOVERNMENTIN PERU, WE DECLARE THE NATION CULTURAL HERITAGE 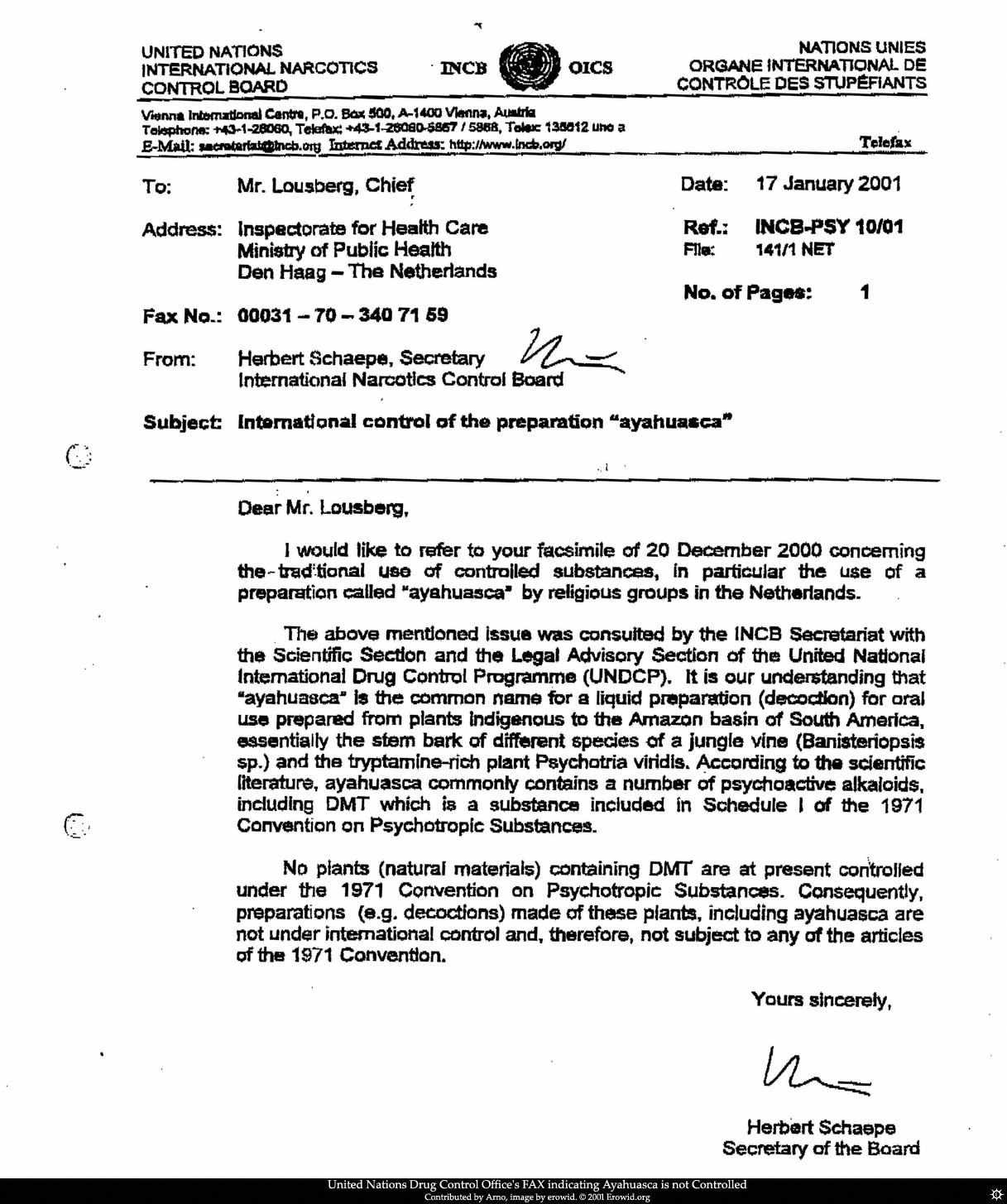